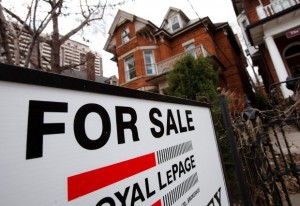 Canadians will learn an ugly lesson if they keep piling on debt the way they are at the moment.

The Bank of Montreal report that came out Monday and noted that almost three-quarters of homeowners would feel a significant squeeze from even a small rise in interest rates shows just how close Canadians are to falling over the edge of their finances. What it means, in essence, is that 73% of the people surveyed can’t afford their own homes. And a lot of them are already feeling the pinch.

A third have cut back on other spending so they can make the mortgage payment. One in six has been forced to raid their savings to pay current costs. This is at a time when interest rates are at historic lows, which means they can only go up from here. That they will rise, eventually, is inevitable. Yet 16% of the people in the survey said they might not be able to make their payments if rates rose by even a tenth.

You don’t have to think hard to imagine what the fallout would be from an event like that. You can picture the headlines — “Canadians driven from their homes by rise in interest rates” – and the panic in Ottawa. The papers – well, some of them, anyway – would be full of stories about innocent families who insist they had no idea they were getting into such a mess when they took out the mortgage on their “dream home.” The fault, unquestionably, would be placed elsewhere: on the banks, on Ottawa, on the Bank of Canada, on whoever failed to produce an economy in which interest rates could remain magically low forever.

That would be James Flaherty, or Mark Carney, or the overpaid CEOs at the Big Banks. New Democrats would be enraged. NDP leader Thomas Mulcair would probably find some way to blame it on Alberta or the Dutch Disease, or maybe both. But all those people (except Mulcair, of course) have been busy issuing warning after warning about the trouble we’re heading for. Mr. Flaherty has repeatedly tightened mortgage rules in hopes of stemming the enthusiasm of Canadians who seem willing to subject themselves to any level of borrowed money in order to move into a house they may never manage to own. Mark Carney, the Bank of Canada governor, has wagged his finger at big borrowers so often he seems almost sheepish about it.

Related
Canadian economy will recover to ‘full capacity’ by the end of 2013: Bank of Canada
Ottawa clamps down on prepaid credit cards over hidden fees, will ban expiry dates
Canadians are immersing themselves in debt — Is it government’s fault?
“Me droning on in public about the dangers of household debt is a way of reminding households that: don’t assume that current levels and the current situation will be there forever,” he said on one recent address.

Analysts and economist are filled with forecasts of doom, and that was before the latest figures showed debt had continue to pile up over the past year to a record 163% of household income, which is where the U.S. was before the 2008 collapse, and about 10 points higher than anyone thought. As the housing market cools and home prices slip, a lot of people could find themselves making monthly payments they can barely cover for a house that isn’t worth what they thought it was. If you can’t cover the mortgage, you just have to pray the roof doesn’t start leaking or the furnace fail.

And borrowers won’t really have anyone to blame but themselves. The warnings are out there. The examples are rife: all anyone has to do is examine the experience of U.S. homeowners over the past few years. The dangers aren’t a secret, they’re just being ignored.

But people keep borrowing, because it makes them feel good to spend, because they’re too busy to think about it, because they figure they can cover the payments in the short term and will deal with the future when it comes. And because they can always blame it on someone else when the roof caves in.