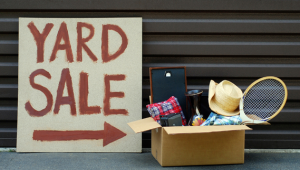 Economists and politicians have scolded Canadians for the past few years about their personal debt levels, but the fact that they continue to rise suggests many lack the will to change spending habits.

Montreal resident Jenni Glad-Timmons, however, decided to do something to end her family’s vicious spending cycle.

‘A few summers ago, we purged the house, put stuff out for charity, cleaned. When we were done, I walked around and thought, ‘We haven’t even put a dent in this place.’ Something snapped at that moment.’— Dave Bruno, creator of The 100 Thing Challenge

Tired of being on the “status-quo, middle-class treadmill” of mindless consumption and mounting debt, the Glad-Timmonses undertook a project that most people would consider drastic: paring their worldly possessions down to 100 items.

“We just decided that life’s too short to just be doing this,” says Glad-Timmons, a 36-year-old public health nurse, referring to the North American consumer lifestyle. “We weren’t really being good role models for the kids, either.”

In April, Glad-Timmons, her husband, Gary, and their two children, Cristian, 9, and Emmi, 5, each began a process of reducing their individual belongings to 100 things.

The family started by holding a series of garage sales, and then hunkered down for a deeper purge. Glad-Timmons says her son had the easiest time paring down. Cristian’s entire inventory of toys now consists of his collection of Tintin books and a box of Lego bricks he shares with his sister.

Included in the items Glad-Timmons and her husband either sold or gave away were cross-country skis, a handmade wooden chest that once belonged to her paternal grandfather and their bed frame. She and her husband now sleep on a mattress on the floor. The initiative “was an interesting process — and it still is, because we’re not there yet,” says Glad-Timmons. “The kids are there. They’re both under a hundred things each.”

The family took inspiration from a New York Times article about a Seattle couple who completed the 100 Thing Challenge, an initiative started in 2009 by American blogger Dave Bruno.

Bruno came up with the idea while struggling with his own consumption habits.

“A few summers ago, we purged the house, put stuff out for charity, cleaned,” says Bruno, an online marketing manager and adjunct history professor at Point Loma Nazarene University in San Diego. “When we were done, I walked around and thought, ‘We haven’t even put a dent in this place.’ Something snapped at that moment.”

That night, Bruno created the 100 Thing Challenge, which he conceived as a way of fighting his consumer impulses and striving for a life of, as he calls it, “simplicity.”

He believes that divesting ourselves of unnecessary items not only frees up physical space, but leads to a spiritual transformation.

“Financially, that goes along with, say, breathing room in our heart and souls. We don’t have to go out and buy one more thing to feel good,” says Bruno, who is married and has three daughters.

The 100 Thing Challenge — which has adopted the motto “Simplicity is action” — has been profiled in Time magazine, the New York Times and Business Insider. It also has a Facebook page with close to 10,000 followers.

Bruno does regular speaking engagements espousing his anti-consumer philosophy, and says he is currently looking for investment to help him produce “simplicity action kits,” which would be physical instruction booklets on how to lead a clutter-free life.

The emotional aspect of shopping

In Bruno’s own process of culling, he did away with once-cherished items such as his guitar, camera and model trains. But one of the most difficult choices was getting rid of his woodworking tools, which were sitting idle. In doing a self-assessment, he realized that he was buying more tools as “emotional compensation for not actually woodworking.”

“That’s a common experience for folks,” Bruno says. “It’s like, ‘Well, I’m not a camper, so I’ll go out and buy one more piece of camping gear to reconcile in my mind that I don’t get out enough.’” San Diego blogger Dave Bruno started the 100 Thing Challenge in 2009 as part of a personal quest for simplicity and fewer personal belongings. (Courtesy of Dave Bruno)

Mike Mulvey, assistant professor of marketing at the University of Ottawa’s Telfer School of Management, says our consumption habits are largely driven by emotion.

“Why do people buy? Well, the reasons are as diverse as the stuff that they own,” says Mulvey.

“The simplest way to look at it is [people] want to achieve their goals. Usually, the goals have to do with actualizing some vision of who one wants to become.”

Pastimes such as reading, cooking and fashion are all modes of self-expression, says Mulvey, and “those things all require stuff to make the experience happen.”

The burden of home ownership

One of the reasons Glad-Timmons decided to take the 100 Thing Challenge was that despite the fact that she and her husband were both working full time at well-paying jobs, they still had substantial debts.

Another consideration was their daughter, Emmi, who has a genetic disorder called Cornelia de Lange Syndrome. It affects her physical and mental development and requires costly speech-language therapy.

Part of the strategy for simplifying their life was abandoning the problems that come with home ownership. And so earlier this year, they sold their century home in Thunder Bay, Ont., and became renters in Montreal’s Notre-Dame-de-Grâce neighbourhood.

Not a mainstream idea

Pat White, executive director of Credit Counselling Canada, commends the family’s efforts, but thinks most people are unprepared to abandon consumerism to the same degree.

“I don’t think people will change that much,” White says. “I think it will probably be the minority who say this is a really good idea, but realistically, I don’t think it’s going to be a mainstream type of thing.”

“It’s staking out an extreme position, which is fine in terms of their agenda and having clarity of vision, but in terms of getting the masses to come along, I think you need to take some baby steps to get there,” says Mulvey.

“Some people think about it as [though] we’re trying to prove something, but we’re not. We’re no better than anybody else. Everybody makes a difference in the world in their own way,” says Glad-Timmons.

“This is just something we needed to do.”